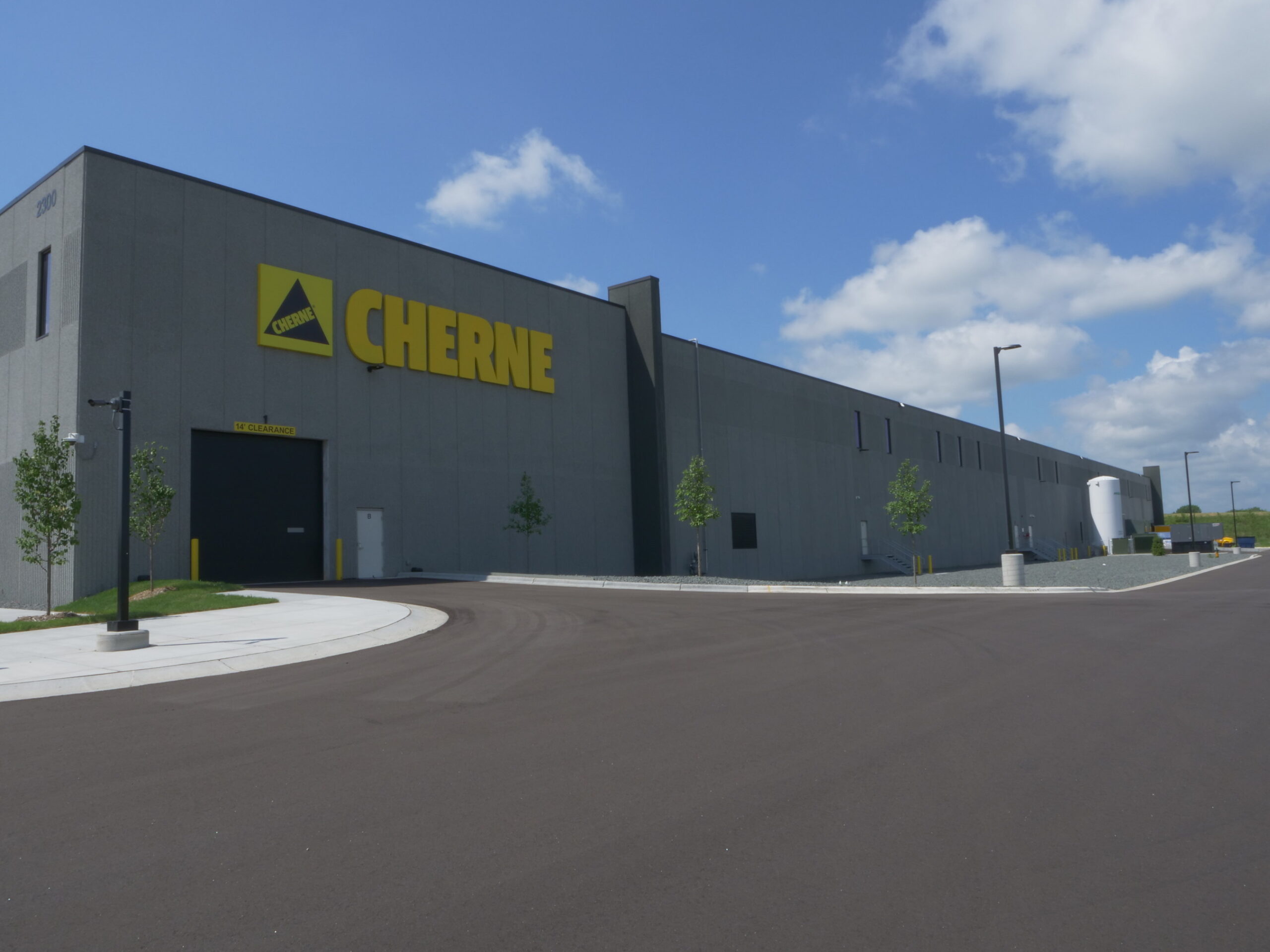 Cherne Industries, part of the Oatey Co. family of brands, recently completed a historic move of its headquarters and manufacturing operations — its first in more than 60 years — to a newly constructed, 130,000-square-foot facility located in Shakopee, MN, situated 25 miles southwest of downtown Minneapolis. OlympiaTech was proud to be the electrical partner for the project.

Opened in March, the manufacturing portion of the new, state-of-the-art headquarters was built to Cherne’s exacting specifications by the OPUS Group, as management sought to more fully integrate all its operations under one roof. Shakopee combines automated robotic manufacturing pneumatic pipe plugs, mechanical pipe plugs and testing equipment with a new research and development laboratory for product testing, extensive customer training facilities, and an in-house machine shop for making all the needed tooling on premises, rather than depending upon outside sources.

In addition, the new building contains ample storage space for raw materials and finished product, so that Cherne no longer relies on outside warehousing for storage and shipping. The resulting, more efficient material flows have already cut lead times and increased operating efficiencies since the move.

“Cherne has been growing at a double-digit pace for the past seven years,” says General Manager and seven-year company veteran David Biron, explaining why the former, 66,000-square-foot facility in nearby Edina was no longer suitable. “We had acquired some robotic equipment and other automation components in recent years, but as the business grew, we simply ran out of space.

“The R&D and testing operations demonstrate Cherne’s newly fortified capabilities as we maintain world class, industry-leading new-product development that provide the safest, most productive value-added solutions for our end users,” Biron continues. Cherne can now test its entire production on premises, instead of relying on outside facilities, as had sometimes been the case in the past.

“The old building did not offer a setting large enough — and therefore safe enough — to test larger plugs and testing equipment, which expand up to 120 inches,” says Biron. “No other plug maker can offer as comprehensive or as safe a testing facility as what we’ve built in Shakopee.”

The new training facilities are a significant upgrade as well. Shakopee sits over a specially installed, underground network of 24-inch and 12-inch pipes that are 300-feet long and accessible through two manholes.

All of it is contained inside the building to simulate an actual job site. Visiting customers enjoy a hands-on learning experience, installing actual plugs and testing a simulated pipeline, notes Biron: “We can install and remove plugs and testing equipment, create leaks and allow trainees to test, locate and repair them — just as they would in the field.”

Robotics = safer, longer-lasting plugs: The most impactful upgrade with the new Shakopee operation is the inclusion of a pair of automated robots for producing Cherne’s industry-first and industry-leading offering of pneumatic plugs. The robotic technology creates a mechanical bond to more securely join the plug’s aluminum end plate to its premium natural-rubber core.

“No other North American manufacturer is building plugs with one robot, let alone two,” says Biron. “Other producers still assemble them by hand, as they have been for decades. This entire facility demonstrates the enduring strength of the Cherne brand and why a customer can be comfortable buying and installing plugs and related piping products from us.”

Rapid turnaround: Until this past March, every plug sold by Cherne over the past five decades and more had been made in the company’s former Edina facility, erected by founder Lloyd Cherne in 1970. (Oatey Co. bought Cherne in 1990.) So, it may seem surprising that the relocation to Shakopee required only seven days, as Biron reports, with the new plant successfully running 70 percent of the company’s catalog by the end of that first week.

Biron expects to employ 130 personnel, a gain of approximately 20 over Edina. Among the reasons Cherne chose to move to Shakopee was to tap its “wide cross-section of qualified workers” to fill the diversified roster of skilled technical positions needed to operate and maintain Cherne’s large, automated equipment at a high level.

“We drew it all up on a napkin two years ago,” recalls Biron, “and spent another 18 months meticulously planning the move down to the smallest detail. It was unbelievable how our team came together, and it could not have gone any more smoothly — even with all of our large pieces of equipment and despite the pandemic. In a year when everything seemed to go wrong, this move and its aftermath have gone exceptionally right.”

Some key partners that were critical to making the move go as well as it did were Cullinan Rigging and Erecting, OlympiaTech Electric, Voson Plumbing and Allen Mechanical. “Without their attention to detail and customer focus,” says Biron, “this move wouldn’t have been successful.”