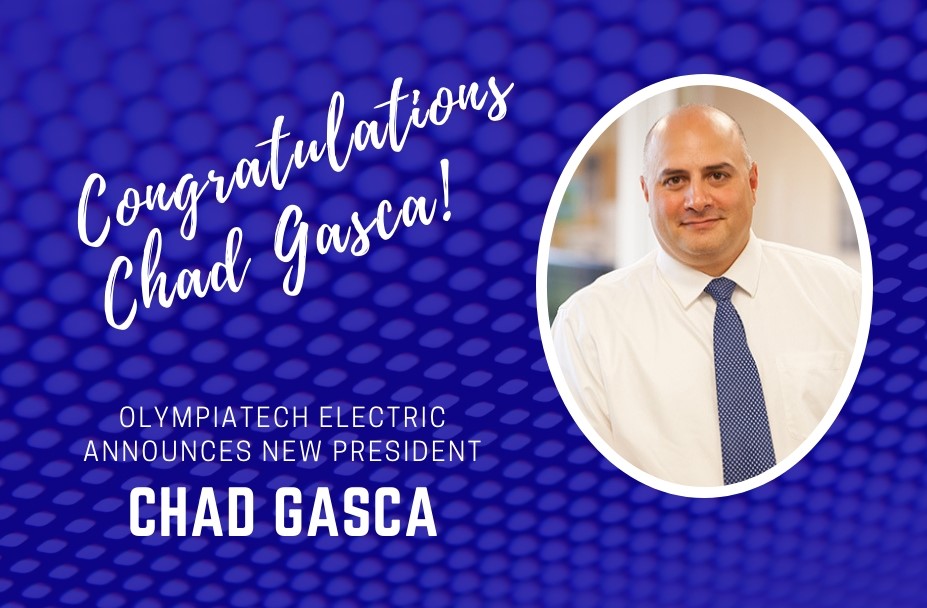 OlympiaTech Electric has appointed Chad Gasca as its new president. Chad has been with OlympiaTech for 21 years and most recently served as vice president. He started his career with OlympiaTech as an electrical apprentice and has occupied many roles within the company. He is also the master electrician for OlympiaTech. Mr. Gasca will be taking the reins from 20-year president, Paul Kosmides who is a co-owner of OlympiaTech along with his sister and business partner, Seaen Kosmides.

“I’m very excited to announce our new president, Chad Gasca” said Seaen Kosmides, chief executive officer of OlympiaTech. “Chad has been integral to our success over the years and I can’t think of a better person to help me lead OlympiaTech into its next chapter.”

Paul Kosmides will remain a principal of the company and will serve as a special advisor focused on business development, pre-construction, and employee mentoring and engagement.

“Paul’s leadership has created a very successful foundation for OlympiaTech to build upon. His mentorship has been invaluable to my development as I transition into this new role,” commented new president, Chad Gasca. “As we look forward to the future, we will continue to grow and strengthen our position as an innovative, high-quality, and relationship-focused design-build electrical contractor while staying true to the core values instilled by the Kosmides family.

In late 2018, OlympiaTech announced its transition to a woman-owned business when Seaen Kosmides became majority owner and operator and was appointed as the company’s new chief executive officer. Earlier this month, the company received its certification as a WBENC-Certified Women’s Business Enterprise.